”I’m trying to achieve a balance between writing on my novel project and learning about the Frisian culture.” 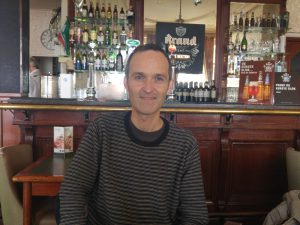 How do you like Ljouwert en Fryslân so far? What are your impressions?
‘First of all I’m very grateful for the warm welcome I received. I really feel at home here. Since I arrived in Ljouwert I was invited to many cultural events. On 22 October I took part at a Festival of Basque Literature in Cornjum. It was a nice event. The Frisian poet Syds Wiersma and I read some Basque poems, both in Basque and Frisian language, so that people could understand the poems and at the same time they were able to get the rhythm and the sound of the words in Basque language. After the poetry reading I had a talk with Gerard de Jong and Bart Kingma, the Frisian writers who spent two months in the Basque Country  thanks to the Other Words programme. It was a nice conversation about our own cultures and literatures.’ 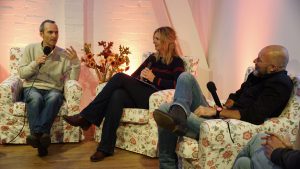 What are your plans for your stay in Ljouwert?
‘I’m trying to achieve a balance between writing on my novel project and learning about the Frisian culture. My novel project deals, among other issues, with diverse realities beyond the Europe of nation states and in that way I think my stay in Fryslân is a great opportunity to know more about different cultural and regional realities in Europe, get acquainted with Frisian culture and literature and achieve a better understanding of other views and ideas.’

You wrote three crime books. Are those typical Basque books?
‘I don’t know whether they are typical Basque books or not and to be honest I don’t mind so much whether they are or not.  All of them are set in the Basque Country. They deal with current topics in our society such as immigration and identity. The main character is a detective who is a former journalist and investigates some murders. Though some decades ago crime books were not so common in Basque literature, crime fiction genre has been gaining ground in recent years.’

What can you tell about your work in daily life?
‘I work as a translator from Spanish into Basque at the Public University of Navarre. My main task is translating access examinations of the university, administrative documentation, helping university staff and students with questions about Basque language and interpreting from Basque into Spanish at official meetings at the University.’ 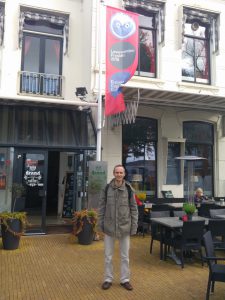 Is the Basque language spoken a lot where you live?
‘I live in Iruñea, the capital of the Autonomous Community of Navarre. According to some surveys Basque speakers represent more than 10% of the  population in Navarre. The Basque language is recovering slowly and it is spoken mainly in the north and central parts of the region. Although the number of Basque speakers has increased, it is not the case with the number of people who use Basque in a daily basis. That’s why there’s still a big concern about the language.’

What can you tell about the position of Basque language in Spain?
‘The Basque Autonomous Community is the other region in Spain where people speak Basque. Basque speakers represent over 30% of the population. The situation of the Basque language is better there than in Navarre, but there is as well as a big concern about the real use of the language in the daily basis.’

Does the government help with the publishing of books in Basque?
‘As far as I know there is public funding for publishing houses so that they can publish books in Basque. There is also funding for translating books into Basque. But at the same time I think that when we talk about writers and translators, beyond literary and translation prizes, there’s a lack of grants, which implies that it is very hard to develop your own project.’ 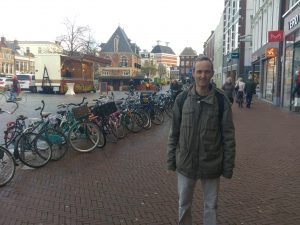 Years ago there was a lot of terror coming from the Basque separation movement ETA. But it has become quiet. What is the impact of the Catalan situation in Basque Country?
‘The situation in Catalonia has a huge influence on what happens in the Basque Country. Many people in our community have a strong feeling of solidarity with the Catalan people. As in other parts of Europe they are horrified to see the antidemocratic and authoritarian attitude of the Spanish government towards the demands of the Catalan people. They see that the Catalan question is not only about independence but also about democracy and civil rights.’

You published a Basque translation of an essay of the Austrian writer Robert Menasse: Der Europäische Landbote. What is the essay about?
‘The essay is about the Europe of Regions. Menasse supports the idea of a supranational Europe that would be based on a network of regions. He stresses that Europe should go beyond nation-states and national interests, which are nothing but the short-sighted economic interests of national elites. As we can see these days, especially in regard to the Catalan question, the idea of the Europe of Regions has become one of the most discussed topics in Europe.’

What is your idea of Europe as a union of states?
‘Instead of a union of states I would prefer to talk about a union of citizens. I think nation-states are unable to create Europe. It is time to go beyond states and borders and build a new Europa developing a true post-national democracy based on citizens, cities and regions. The real issue is no longer the sovereignty of each nation state but the sovereignty of all European citizens. More than the economic interests of national elites, the social interests and common values of European citizens should prevail. That’s why we need a better understanding of the different realities of our regions across Europe.’

Did you visit the Frisian Museum? And what are your plans for the next days?
‘Yes, I visited the exhibitions about Mata Hari and Frisian culture. They were amazing. For the next days  I would like to deepen my knowledge about the Frisian literature and culture getting in touch with Frisian writers and attending a meeting with students at the NHL Hogeschool, as well as keep writing both on my novel project and on the writer blog of the Other Words programme.’