“I came to Ljouwert to finish my first book of short stories, whereas the second part of my writing plan was to write a cycle of poems about different kind of migrations/movements of birds, ships, even islands.” 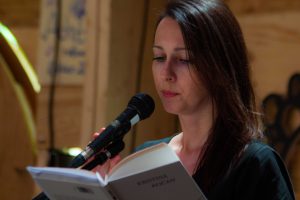 How did you like your stay?
‘It was simply wonderful. It felt so good to be in Friesland and consequently I was able to write a lot. I immediately found the perfect work pace for me. In addition, I met such amazing people and excellent poets who have made my experience in Ljouwert even better. I wish it was a longer stay though – I would have done so much more.’

What things did you do and see during your stay?
‘In Ljouwert I found MeM to be one of the best places for me. The atmosphere and the people and the interesting program. Before my departure I was even invited to have a reading there myself, which was very nice. I read my poetry in Slovene and André Looijenga presented the English and Frisian translations of my poems. Escher’s exhibition was also a highlight. Apart from having a great time in Ljouwert, Gerard de Jong and Mirjam Vellinga took me to the Bildt region, some RIXT poets invited me to an afternoon poetry session at Swetteblom. I attended an editorial meeting of the journal Ensafh in Feanwâlden at Jelma Knol’s place. Then I visited the fascinating island Schiermonnikoog and places like Harlingen, Hindeloopen, Stavoren… Also did a bike tour from Sneek to Hindeloopen through the meadows along the channels, which was magical. The Frisian North Sea has completely captured my heart.’

What was your writing plan for Other Words?
‘My writing plan consisted of two parts. I came to Ljouwert to finish my first book of short stories, which will come out in 2019, whereas the second part of the plan was to write a cycle of poems about different kind of migrations/movements of birds, ships, even islands. For example, I was doing an in-depth research on Dutch tradeships from the 1600s and wrote poems about them. Furthermore, I was learning about the “ljip”, the bird that mesmerized me completely. I was especially grateful when I was able to spot some with the help of the poet Syds Wiersma. Delightful moments.’

You were in Ljouwert with a friend, a filmmaker. What can you tell about him?
‘Yes, Kristijan Robič spent some time with me in Ljouwert because he is planning to do some video poetry on my poems. We used the time together in Friesland to develop a concept that we would both like for the videos. He was able to go out on shoots all over Friesland; the footage will be used for video poetry. Otherwise, he works as a video producer/ filmmaker, usually involved in short films and documentaries.’

Several of your poems are about New York (e.g. ‘the list (of things to do in New York)’. Have you been to New York?
‘Yes, I have. Several times actually. This is a city that is always deeply inspiring to me because of its vibe, art, bookstores, architecture… But staying there for a month is the maximum of what I can take – then I fall sick with longing for peace and quiet, trees, fresh crisp air, the smell of hay and birds…’

What can you tell in short about your poetry? Is there a central theme in your work?
‘I wouldn’t say there’s a central theme in my poetry. I don’t have any rules. I don’t know – it’s difficult to talk about your own writing, I mean not difficult, I just don’t particularly like it. I find my poems to be different from each other, especially when it comes to handling the different impulses that spark a poem. When it comes to form, I don’t use punctuation or capital letters, I like playing with enjambments, so that the lines can convey multiple meanings, depending on the readers really.’

When did you start writing?
‘Words have always fascinated me, so I began writing rather early but was very shy about it. It wasn’t until my time at university that I was ready to show my work to others and publish it. At that time I went to the United States for the first time, to Texas to be precise. That was the turning point for me as a poet, meeting the right people at the right time, having the right conversations…’

Who are your favorite writers?
‘Oh, this is the most difficult question. This changes constantly. I can name a few that I am reading now: Galway Kinnell, Stanley Kunitz, Robert Hass, Gary Snyder, Cathy Song, Louise Erdrich… the list is endless. Still mostly American poets and writers. Of course, there are several Slovenian writers that I admire; I could never get tired of reading Uroš Zupan, Jure Jakob, Tone Škrjanec and many others.’ 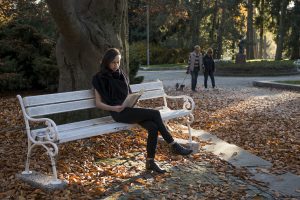 Why American Poetry?
‘I fell in love with it completely during my study years. First it was the way the poets expressed the centrality of the self with such ease, just think of Whitman. Then probably because of the immense diversity in theme. But mostly because I have always felt and loved this certain openness in American poetry that was missing in European poetry. When you drive through the States you get a true feeling of the open road, the feeling of vastness, and I think this can be seen also in their poetry. And then there are all those excellent nature poets that I admire… I think there are numerous reasons why I am so fond of American poetry.’

What work do you do besides writing?
‘I have been doing so many different things from teaching at university, translating, working with the youth but for the past years my work is related to writing and literature only. In one way or another. So apart from writing poetry, I began working with musicians a few years ago. I have been writing lyrics for the Slovenian band Brest, and have been involved in the project with a Slovenian drummer Denis Jančič by combining poetry and drums. For the last two years I also got on board with an organization called MKC and helped in organizing an annual literary festival that takes place in Maribor. Throughout 2018 I conduct weekly literary workshops with a group of people with mental health problems.’

What are your hobbies and interests?
‘I like to joke that if I weren’t a poet, I would be an ornithologist because birds are a great passion of mine. If somehow I couldn’t become an ornithologist, I would be a chef in a small restaurant who is a birdwatcher at least in her free time. (laughs) My interests are closely connected to my work, and I am very pleased I have chosen poetry as my vocation since it is my deepest interest.’

Do you always write in Slovenian?
‘Yes. I love my mother tongue. I believe this is one of the most important things for writers; to write in their mother tongues. I mean, I adore languages, I like speaking and learning new languages but when it comes to my creative work, I absolutely stick to Slovenian. Especially being such a small language (spoken by app. two million people), I am convinced it is our duty to do as much as we can to keep the language alive.’ 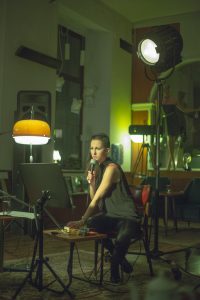 What more can you tell about the city where you live/your country?
‘Maribor is about the size of Ljouwert. It’s a quiet town, the center is lovely. It has a great strategic position so one can easily reach Venice, Vienna or Budapest. I like it; I think the quality of living is really good.’

Your last poetry collection was published this year. What does Šivje mean?
‘The word šivje is basically a neologism; it doesn’t exist in a dictionary. Therefore it is also difficult to translate. The word šiv in singular means seam or stitch but I wanted a collective noun that would convey the meaning of many seams/stitches together.’

And what does Šara mean?
‘Oh yes, the title of my first poetry collection is also an intriguing word carrying several different meanings and this is exactly what I wanted to capture then. The basic meaning of the word is junk, like old junk, things that are unnecessary, lying around the house or the attic. The second meaning of šara is more archaic and stands for stain, spot, even freckle; in some cases šara can stand for color. If you take it as an adjective šarast, then it means colorful, multi-colored. There are actually more meanings of the word šara in different Slovenian dialects. A fabulous word. I like playing with words, creating neologisms and searching for lost or forgotten words, even rescuing them in a way.’ 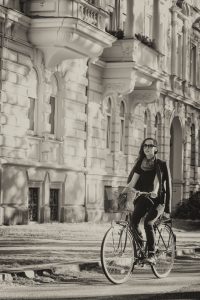